The Scent of Decay

The following post is from Pastor Monique’s blog on The Community. It is reprinted here for your reflection: 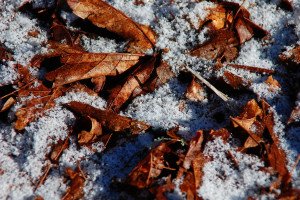 Here in Ottawa, there is no question that we have experienced one of the mildest Decembers in history. Snow did not cover our yards until mid-January, and it seemed to take forever for the Rideau to become a skating rink.

But the snow did come: over ninety centimeters in the month of February alone, and of that, a record-breaking fifty-one centimeters fell in one day. This extreme accumulation caused rarely experienced consecutive snow days at our local schools (eliciting great jubilation in our home) and cancelled activities and events. For snow enthusiasts, the sheer amount made one forget about how temporary its existence would be. For others, reminding oneself of snow’s transient nature was a survival tactic. Either way, the snow consumed our landscape, and in the thick of it, we wondered whether the season would ever come to an end.

A walk around my neighbourhood earlier this week indicated that the ending of the winter season had arrived. Evidence of change was around every corner. My senses were inundated with mud and dirt covered snow banks, puddles, and leafless trees. Gardens looked horrible, the grass was far too wet, and water poured off the eaves. The local farmer fields had become large lakes housing Canadian Geese and the streams and rivers swelled beyond their capacity. The firmament was filled with the scent of rotting leaves and the death of last summer’s growth.

It’s not pretty this time of year. Death and endings in our lives rarely are. They look bad, they feel bad, they sound bad and sometimes they even smell bad. Our own seasons of change, transformation, and death push our senses and our hearts beyond our capacity. Sometimes it feels like we have been buried in snow with no hope of emerging.

But a season never lasts forever.

The rotting pile of last year’s leaves will feed the gardens and grass underneath. The fields will drink the melted snow. The rivers will recede. The geese will settle in and begin to nest. The sun will encourage the flowers to end their stagnation. The smell of decay will depart. Death always brings forth new life, with all of its sights and sounds and smells.

A new season will always emerge—resurrected and born anew.

Please indicate on the Paypal 'Notes to Seller' area at check out if there is a particular church in our parish and/or ministry area that you would like your donation to be directed to.

We are a growing and vibrant group of individuals and families of all ages eager to welcome all who are seeking to be guided by faith in their life-long journey! We are a community where you can come as you are!